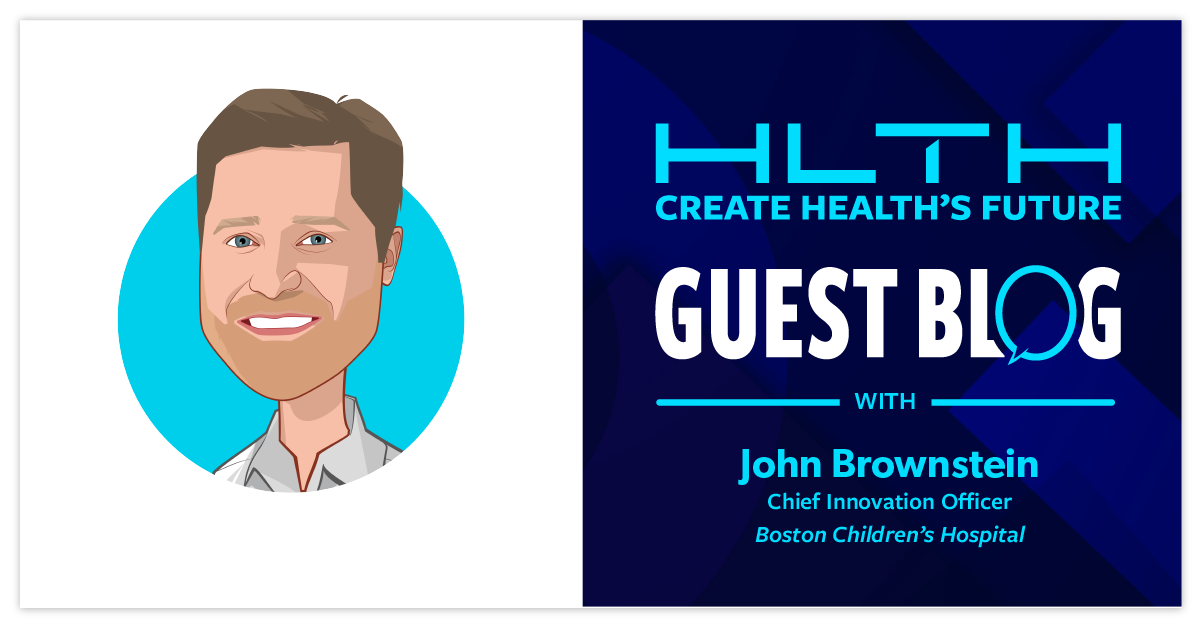 John Brownstein, Ph.D is Professor of Biomedical Informatics at Harvard Medical School and is the Chief Innovation Officer of Boston Children’s Hospital. He also directs the Computational Epidemiology Lab and the Innovation and Digital Health Accelerator both at Boston Children’s. He was trained as an epidemiologist at Yale University. Overall, his work aims to have translation impact on the surveillance, control and prevention of disease. He has been at the forefront of the development and application of data mining and citizen science to public health. His efforts are in use by millions each year including the CDC, WHO, DHS, DOD, HHS, and EU, and has been recognized by the National Library of Congress and the Smithsonian.

HLTH Team: What are your short and long term projections for how COVID-19 will progress in the US? Let’s focus on 1, 2 and 6 months out.

John Brownstein: It’s challenging to know what this is going to look like over time. There are some credible models that are being developed by leading experts in the space. Of course, a big part of it relates to factors of how the response happens. So, how quickly a population responds early on before you even see cases; around social distancing, various closers, schools, mass gatherings. And then, how well testing is in place to identify cases and to track contacts and attempt to really isolate the infection, but also isolate people. The more that works, the more we have the concept of bending the curve like what we saw in South Korea where with massive amounts of interventions, social distancing, testing, tracking, contact tracing, they were able to deal with it incredibly well and reduce the load on the healthcare system. Obviously in other places like Italy which didn’t inact some of these interventions early enough and had probably limited capacity on the healthcare side, have had a much tougher time.

HLTH Team: Within the Federal Government, on diagnostic testing in particular, what do you think the biggest missteps have been so far?

John Brownstein: It’s really challenging because there was this view early on that the risk to the US was going to be low and misidentifying this as a Chinese virus. Experts have recognized that the features of this virus meant that you were going to see cases because if you have asymptomatic transmission people can infect other people without having symptoms which means it’s very hard to contain at the source. The virus was on a path to a pandemic, we could see that very early on, and we were preparing a way that made sense with having adequate amount of testing and preparation. Even though experts have known about these kind of events for years and have tried to sound alarm bells - there’s been a deep lack of funding and support in this space and a lack of preparation on the part of government. So unfortunately, we lost weeks and when you think that there’s opportunity to try to mitigate the spread, the things that you try to do very early on are going to impact what’s going to happen 2-3 weeks from now. Even the moves that we’re making now, even though they seem extreme, are ones that are actually going to have real impact a few weeks down the line.

HLTH Team: Do you think that China gave us enough of a head start?

HLTH Team: Although testing is becoming a little more widespread now, it hasn’t been up to this point. There’s been a ton of articles out there about the inequities between the haves and the have nots with receiving tests, mostly celebrities and athletes. Do you think that gap is closing in who is able to receive a test?

HLTH Team: In your opinion, what steps have been successful so far at the state government level?

John Brownstein: I can only talk about my experience being in the city of Boston. I have to say I’ve been incredibly impressed to see the use of a data-driven approach and models to make decisions on important things like school closures and various social distancing measures. It’s been really all about understanding the current data but also models that make projections of what future cases look like in different scenarios. So as much as it’s been a challenge, it’s been a great moment for the value of modeling in data science as a contribution directly to policy decisions and I think there’s been a recognition that we need to have a data driven approach to this - and I’ve seen that at least locally.

HLTH Team: I think telemedicine is having its moment now, AI as well in some cases- do you think this crisis is going to change the role of digital health in the future?

John Brownstein: Yes, I think this has been an incredible pivotal moment in digital health. It’s a bit frenetic in terms of how much is happening and people obviously want to be opportunistic and we have to be careful not overvaluing the value of tech in this moment. But at the same time, the massive adoption that I’m seeing of chat bots, digital triage tools, telemedicine, remote patient monitoring. We all now recognize how valuable they are and so the fact that we’ve been able to get that kind of traction is incredible, because it’s all the things we recognize as important but we finally got to use case. And I actually believe that it’s not a spike in change but we’re at a new level of adoption that I don’t think will go away. It’s at least exciting for all the things we’ve been trying to push at Boston Children’s finally showing a huge amount of value.

John Brownstein: I think it’s going to be highly variable from location to location depending on how much level of preparation is happening. How much level of bending the curve is taking place - that’s something we’re spending a huge amount of time on, modeling healthcare utilization and making predictions of what might happen. So, right now we’re trying to assess potential risk and so we’re going day by day looking at the numbers and trying to evaluate where we are on this epidemic curve. Every health system across the country is doing some level of utilization modeling which on one hand is incredibly stressful and on the other hand, exciting to see these sorts of analytics directly being applied.

HLTH Team: What are your thoughts on when hospitals will get access to some of the experimental treatments that Trump spoke about?

John Brownstein: Vaccines are far off. It depends, but obviously we’re talking about utilization of medications that already have safety profiles that pushes them a lot quicker into potential use. So we’re talking months as opposed to years, because we already have safety profiles on things like chloroquine. I don’t know how far off, but obviously clinical studies still need to be shown, so widespread prescription can happen.

HLTH Team: The HLTH community is mostly executives across the health ecosystem - what steps could they take to contribute to the solution? Let’s focus on health tech startups.

John Brownstein: We’ve seen a ton of health tech startups building technology to be, you know, it’s a double edge sword because it can create confusion. But we’ve seen so many companies developing specific products for covid and offering them for free which has been amazing to see and also what we’re seeing is an incredible amount of sharing of data cross health systems among numerous different conversations across health systems where everybody’s in real time sharing the value of startups with others which is creating rapid adoption of tech. The fact is, finally health systems are working at the speed that startups were always hoping for. On one hand, they’re not in this big buying moment, but on the other hand they’re ready for adoption. So, as long as startups are figuring out their business model, as long as they can get to adoption and worry about potential license fees after, it’d be incredibly successful.

HLTH Team: Lastly, what resources out there now do you think are particularly helpful?

John Brownstein: We have our own resource at healthmap.org/covid-19, we’re spending a huge amount of time trying to create a global database of cases which have been used by the government and by corporations to get situational awareness. Obviously, we’re spending a lot of time and Hopkins has a great resource as well.